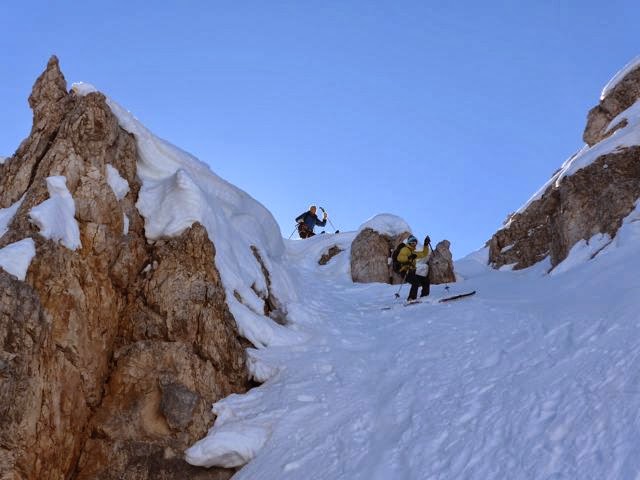 Monte Pares (known to the valley locals as Sas de Crosta) rises to the SW of San Vigilio di Marebbe and Simon Kehrer had noticed a possible line of descent a while back that, starting from the summit, runs down the NNE Face. According to those who skied it recently, the obvious line is clearly visible fro the centre of San Vigilio di Marebbe and fascinating.. The start of 2014 brought with it exceptional quantities of snow and resulted in a compact snow cover down the entire line of descent.

Simon Kehrer, Paul Willeit and Albert Palfrader set off early in the morning from the so-called spiaggetta di Ciamaor with skis and skins. The reached the panoramic Jú de Rit, from here the route steepens and ascends SW past exposed slopes to reach the ridge. The view from the summit, just above the cross, was spectacular and made it well-worth the effort. The descent starts 100m below the summit on the North Face by taking the steep and narrow gully that widens as height is lost. After circa 150m the gully leads to a small slope, from here the descent continues westwards to reach a narrow, obvious depression. A further 150m lead to a steep, 15m mixed drop of rock and ice. This section was breached by downclimbing, after which skis were put on once again and the descent continued for another 150m to reach a large wedged boulder. An abseil belay was equipped on the lefthand side and a 25m rappel was made. 50m were descended on foot, with crampons, due to the compact and icy snow. After this interruption they skied on down past a narrow bottleneck and, trending to the right, they reached the final easy section that led through the woods and down meadows to the piste at the bottom of the valley.